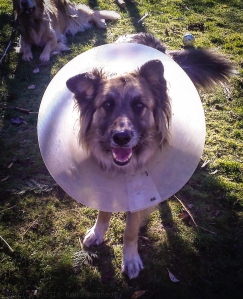 When Otto and the astro-dog get back from their walk, Otto’s building looks like it’s on a terror alert. A really loud helicopter circles above and two soldiers in dark blue fatigues, holding automatic weapons across their chests, stand guard at the entrance. One checks who goes in and the other checks who comes out. The nuts must’ve done something really bad this time, Otto thinks. It’ll be the last straw and off to military boarding school they’ll go. Otto will get a bedroom all to himself, but it’ll be way too quiet with them gone.

The top of Otto’s head comes to the soldier’s hip as he blocks Otto’s way to the building entrance. “Are you a resident of this building?”

The soldier cradles his gun, rocking it like it’s a crying baby. “I need to see some identification.”

Otto looks down at the dog. “I sure hope you have some identification because I don’t.” He looks up at the gun. He’s never seen one up this close. It’s shiny and oily, like Billy Thorton’s hair who sits in front of him in math class. “Will dog tags do?”

“If you don’t have identification I’ll need to contact your parents. What unit do you live in?”

“I’m not supposed to be out here on my own and that’ll just get me in trouble.”

“Your parents don’t know you’re out walking your dog?”

The soldier grunts. “Just say your dog had a diuretic emergency and you had to run him outside. You can’t get in trouble for saving the carpets from a big crap stain.”

Otto shakes his head. “I can’t lie to my parents.”

The soldier snorts derisively. “I’m with the government and we lie to your parents all the time. Lying is an integral part of my job, of life, really.”

“My brothers would love your job.”

The building entrance behind the soldier opens and the building’s maintenance man steps out on the sidewalk wearing his locomotive engineer overalls with the embroidered name patch, Stanley. “I’ll vouch for him, soldier. He lives here.” He looks down at the dog and starts to say something, but then pauses to consider, then says, “Sparky’s coat is looking good, Otto. Are you still putting that fish oil in his kibble like I suggested?”

The soldier stops rocking his gun. “Alright, you can pass. We’re more interested in what’s coming out than who’s going in anyway.”

That sounds ominous to Otto, like something is hiding in the building’s shadows. “Why are you here, anyway?” he asks.

That’s what they always say when they want their way, Otto thinks. We’re protecting you from a big threat, just don’t ask for specifics.

Stanley puts his hand on Otto’s shoulder. “Come on, Otto. I’ll walk you in.”

Otto isn’t going to push his luck, so he goes inside with Stanley. The dog follows, but for a moment Otto thinks he’s about to lift his back leg and scent mark the soldier’s shiny boot. Otto giggles. Would that make it a pee polish on top of a spit polish?

At the elevator banks, Stanley looks down at the dog at Otto’s side and says, “I know all of the dogs in this building but I don’t recognize this one. Did your parents finally come around to letting you boys get a dog?”

“Are you kidding? I found him about an hour ago.”

“You won’t believe me if I tell you the truth. Is it okay if I lie to you instead. It’ll be much easier if you say yes. I could say something like a homeless guy who couldn’t afford to feed him any longer gave him to me. That’s what Walnut or Peanut would say.”

Stanley presses the up button for the elevator. “Otto, I work as a janitor. I do the tough stuff others don’t want to do, and let me tell you, after you’ve dealt with other people’s plugged toilets for a few years, you learn to handle the truth.”

“Okay, but you’re going to kick yourself for not taking the blue pill.” He clears his throat. “I found him on the roof deck.”

“That’s no place for a dog to be left loose.”

“That’s not all. He jumped out of some sort of landing pod that parachuted onto the roof deck.”

Stanley rocks back on his heels, pulls on his beard and nods his head real slow. “That explains all the military dudes with guns. They must be on a retrieval mission.”

Stanley and Otto both look at the soldiers outside the building as more gather at the entrance on the other side of the glass doors. A bigwig arrives and the others exchange salutes and start marionetting in front of him. The dog stares at the bigwig too and lets out a quiet growl.

“What is it, boy? Do you know that man?” Otto asks as the elevator arrives and the doors slide open.

The dog’s answer is to pull Otto onto the elevator.

Stanley follows, saying, “He has the right idea. Dudes with guns make my skin cold.” He scratches his head. “If they’re on a retrieval mission, why didn’t they recognize the dog and take him away from you? He’s a unique looking dog with all that fur and those big ears, hard to miss really.”

The dog cocks his head at Stanley.

“And why is that big helicopter still flying circles around the building instead of picking up the landing pod and flying it to PDX or wherever the nearest army base is?”

Otto presses his floor button and as they wait for the doors to close, shakes his head. “There is no landing pod.”

“I mean, there was a pod but it disappeared.”

“Right in front of me. You know when something vibrates really fast and you can’t tell where the edges begin and where they end? That’s what the pod did. It vibrated so fast and kept vibrating even faster that I eventually couldn’t see it at all and it was gone.”

“If this was coming from one of your brothers, I’d laugh it off and go back to work.”

“Me too, especially from Peanut.” Otto reaches down and pets the dog’s side. “If they find him, they’re going to experiment on him and maybe even dissect him.”

Stanley gives the dog a pat too. “Forget that. We won’t let that happen. I know lots of hiding places in this building, if it comes to that.” As the doors close, a hand appears between them, forcing them to open.

“Going up?” the bigwig from outside asks as he gets un.

“Top floor.” The bigwig turns to face the doors like everyone does in elevators.

“You got it.” Otto presses the button for the top floor and the elevator rises in silence, except for the dog. He starts up with his quiet growl again.

The bigwig twists at the waist, he’s even taller than the soldier at the building entrance, and looks down at the dog. “Don’t worry about it, kid. Dogs have growled at me all my adult life. They used to like me when I was your age, but ever since I put on the uniform they’ve been giving me a hard time. Maybe your dog thinks I work for the post office delivering the mail.”

“With a gun to protect those Netflix DVD deliveries,” Otto says.

The bigwig’s eyes dart to Otto’s. and seems surprised Otto spoke up, like he’s used to intimidating people into silence. “You never know, kid. Some people take their entertainment more seriously than their day to day life. And who’s to say they shouldn’t? With the onset of virtual reality the definition between what’s real life and what’s not is getting hazy.”

He’s talkative for a guy carrying a gun as long as I am tall, Otto thinks. “Like the stuff I read in the grocery store check out lines is true? Elvis’s alien baby does party in the White House basement with the president’s clone?”

The bigwig winks at Otto. “Yep, there are pyramids on Mars and alien hybrids have infiltrated the Pentagon. Sounds like an adventure, don’t you think?”

The elevator stops at Otto’s floor and the doors open.

“Have you ever met an astronaut?” Otto asks the bigwig as he steps out of the elevator following Stanley and the dog.

Stanley puts his hands on his hips. “No kidding? You’ve been in space?”

The doors begin to close. “I’ve been to a lot of places.” The bigwig winks and the doors thud closed.

Alone in the hall with the dog, Stanley and Otto look at each other, competing who can raise their eyebrows highest, then look down at the dog.

Stanley leans over and pats him. “This dog doesn’t belong to them, but he is what they’re looking for.”

Otto nods agreement. “They just don’t have a clue what it is they’re looking for.”

Captain Case returns to the roof after walking the building’s perimeter. There wasn’t a sign of anything unusual except for his team’s presence. He sits on the first recliner he comes to and stretches out. They haven’t found anything. It’s a bust. This is the tallest building in this part of town. Stretched out on his back he sees nothing but blue sky. There isn’t a single neighbor building looming over the roof deck. He could be bigfoot grooming himself for fleas and no one would notice. If he were choosing a building to land on with the least likelihood of being seen, this would be the one.

He puts his arms behind his head. “Not a bad life,” he says to no one in particular.

Corporal Bradshaw is the only person beside him on the roof. He looks up from his work scanning the roof surface with a spectrogrometer, a tool that is a cross between a Geiger counter reading radiation and something from Ghostbusters measuring ectoplasm. “Sir?”

Case looks at him. “If you wanted to be a civilian, that is, and live in ignorance of what’s out there.”

Bradshaw is alerted back to his spectrogrometer. “I’m getting some strange readings in this area, sir.”

Case sits up. Washington is scanning the area at the end of the row of recliners. “What does it mean? Is it something?”

“I can’t tell you for certain but something has recently disturbed the normal make-up of this area.”

“Slightly larger than a Volkswagen, sir.”

Case gets up for a closer look. There are four spots the size of grapefruits marking the corners of the area that are a little lighter than the surrounding area, as if someone has scrubbed them clean. If a VW had actually parked on the roof deck, the marks are where the tires would touched the ground. “What do you make of these bleached looking circles?”

Washington runs the spectrogometer over the first one, then systematically goes over the other three. “The readings are slightly higher than the already high readings of the disturbed area.”

“Could be. As you know better than anyone, in this line of work they could be marks left from four missing potted plants or residue from a portal into a new dimension.”

“Take some samples for the lab techs, maybe they can tell us more. Sending in reports on occurrences like this is why they call me Crank Case.”

Bradshaw smiles. “And we all thought it had to do with your love of V8s, sir.”

This is chapter Three of The Watermelon Has Landed, a novel in progress. Chapter Two can be found here: Chapter Two – Big Bird